The Yukon Open Goldpanning Contest Has a New Champion 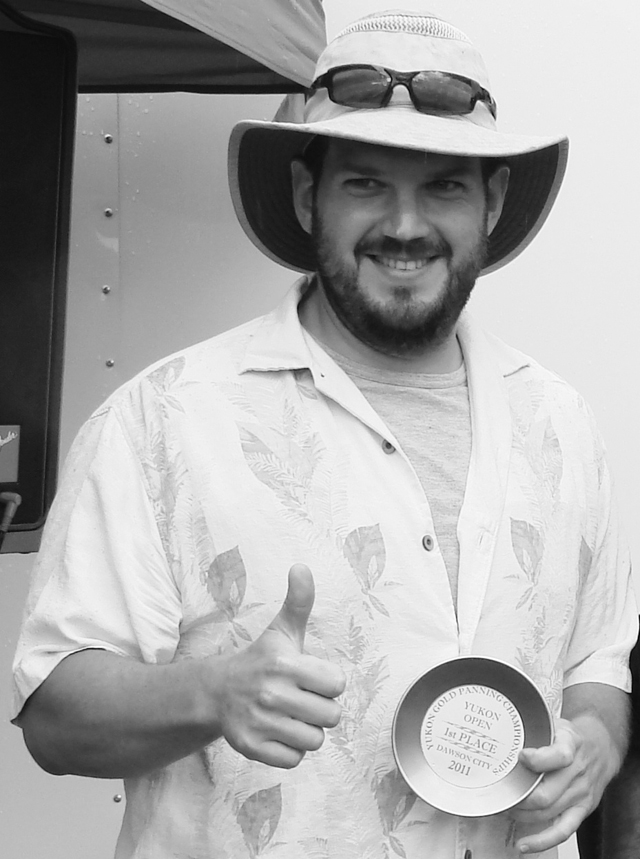 Story and photo by Dan Davidson

Paul Robitaille will be representing the Yukon in this year’s World Goldpanning Championships, which will be held in Zlotory, Poland. He was the winner of this year’s Yukon Open category at the Yukon Goldpanning Championships, beating many time winners Art Sailer and David Miller with a time of 6 minutes. He found seven of the eight flakes of gold in his bucket of dirt in three minutes and took a three-minute penalty for the flake he missed. His combined time was still 28 seconds ahead of Sailer, who did find all eight flakes, and a minute and seventeen seconds ahead of Miller, who also missed a flake and took a penalty.

Miller and Sailer have been swapping the first place finish back and forth for some years, and Miller was last year’s winner. There were eight contestants in total, and four of them were from the Miller clan.

Sailer received $1500 to assist him to attend the World Goldpanning Championships if he should chose to. Robitaille received $2500 and the right to compete there.

The Yukon Goldpanning Championships celebrate the essence of the placer mining that made the Yukon and the Klondike known worldwide in 1897 after the news of the previous year’s discovery made it Outside.

All you need to start is some dirt, a source of water and a decent pan. The rest is gravity, centrifugal force and the weight of the gold. After that it takes swirling water and a keen eye to pick out the gold flakes from the remaining dirt.

Once the gold has been located the panner picks it up with a wet finger (more applied physics here) and transfers it to a vial, which has already been filled with clean water. No one knows in advance just how many flakes of gold have been salted into the bucket of dirt from which each panner must work.

Of course, pans vary. The old-fashioned miners’ pan is not of much use in a competition, but then the various speed pans used in contests would not work well on the creeks or in the clean-up trough.

The sun shone on this year’s event, held on July 1 in the afternoon and a good-sized crowd gathered to watch the action in the Klondike Visitors Association’s annual contest.

There are seven categories in the event, beginning with the Sourdough Open, for those panners 60 years and older. All three of the top panners in this field of eight found all eight flakes. The fastest panner was Herbert Zeman, with a time of 2:27, followed by Coleman Johnson and Diane Schroeder.

The Klondike Open’s top panners among the 12 contestants also found all seven flakes in their buckets. Coleman Johnson was first with a time of 2:28, followed closely by Herbert Zeman and Lorraine Miller.

In the Corporate Challenge teams of four had to find a total of five flakes spread among their four buckets. The Miller family’s Goldbottom team captured first place with all the gold in 17:10. Coleman Johnson’s 98 Drive-in team came second followed by the Down and Outers.

In the Youth Under 11 Years category there were five flakes to be found by the 13 panners. Annie Procee came first with sister Asia second, followed by Joanna Allen.

The Cheechako Open was the next to last event, open to anyone who had barely swirled a pan seriously before. Twenty people accepted the challenge to find the five flakes of gold.

Since the winning time is made up of a combination of actual panning time plus penalties for missing flakes, Odillia Asthaus, who found only three, came first. Juergen Erfurth, who found only two flakes, came second, while Ron Steckly, who actually found four of the flakes, but took longer to do it, came third.

It seems fairly typical of the last several years that it would begin to rain just at the beginning of the awards ceremony, which saw the contestants receiving their gold pan awards under a canopy and then ducking out into the sunlight for a quick photo opportunity.