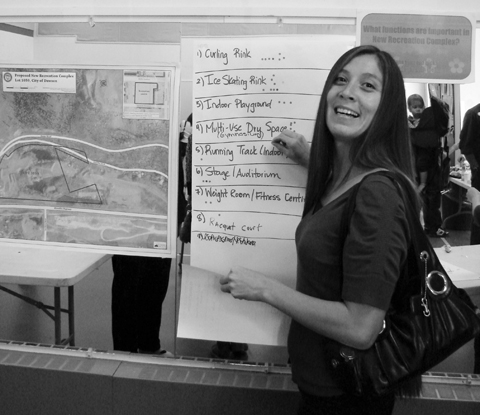 Kylie Van Every, Dawson resident, voices her ideas for the proposed recreation centre.

Once again, Dawsonites are being asked what they would like to see in a recreation centre.

Spurred on by Mayor Peter Jenkins and MLA Steve Nordick, the town is headed into a new round of recreation centre planning, an exercise which began back in the late 1980s and eventually produced the current, angst-ridden Art and Margaret Fry Recreation Centre which opened in the early years of the 21st century after much delay and many construction woes.

The only money available for this new project at this time is part of the funding that was set aside to maintain and fix problems in the Fry Centre when Dawson’s council was restored after the two year trusteeship (2004-2006).

There is enough, council has decided, to begin site preparation at its chosen spot, the tailings piles at the foot of the Dome Road. Ironically, this same site was proposed and rejected by the community in the late 1980s. Since that time, however, the demographic distribution of Dawson and the Klondike has shifted to that end of the town. In addition, a great deal of geotechnical work was done on the site when it was the favoured location for a secondary sewage lagoon project, which was ultimately rejected in a plebiscite, so the soil and ground conditions there are well known.

Soil conditions under the Fry Centre have been a big part of the building’s problems, as they were with the Bonanza Centre, which was the town’s arena on the same spot before that.

At one time the City Hall/Fire Hall building was located next to the Bonanza Centre and it was moved to Front Street, partly to make room for the Fry Centre and partly because it was sinking into the ground there.

Most of the discussion regarding a new recreation centre has taken place either at Recreation Board or City Council meetings, and there hasn’t been a lot of consultation with the general public so far. The Recreation Department used its annual Clubs and Info night, held in the Ancillary Room at the Robert Service School, to kick off this process.

At this early stage, (there is no plan or design yet,) people were urged to think widely, as they were in years gone by, and the wish list soon went far beyond the simple ice arena and curling rink that have been the main topics of discussion at town council.

Mayor Jenkins has tended to lead these discussions by referencing an arena, at which point the other councillors lean his way and say “recreation complex”. Citizens lined up to mark their preferences on the two charts seemed to have the same expanded vision.
So the list soon included an indoor playground, a multi-use dry space (gym), a running track, a stage and auditorium, a weight room/fitness centre and a racquet court.

Quite a few of these items had once been proposed for the Fry Centre, which was supposed to have grown a flexi-gym in time, and has an undeveloped second floor which was intended to be a home many activities.

While the sports groups with registration tables and the 10 programs currently offered by the Recreation Department got a fair amount of attention, much of the discussion and grouping in the room drifted towards the wall charts, which were rapidly filling with coloured sticky dots as the evening went on.

Recreation chair Peter Menzies says the results will be tabulated and studied and brought back to the community at a public meeting sometime in November. By then the territorial election will be over and one of the three parties will be asked to make good on its commitments to voters here.