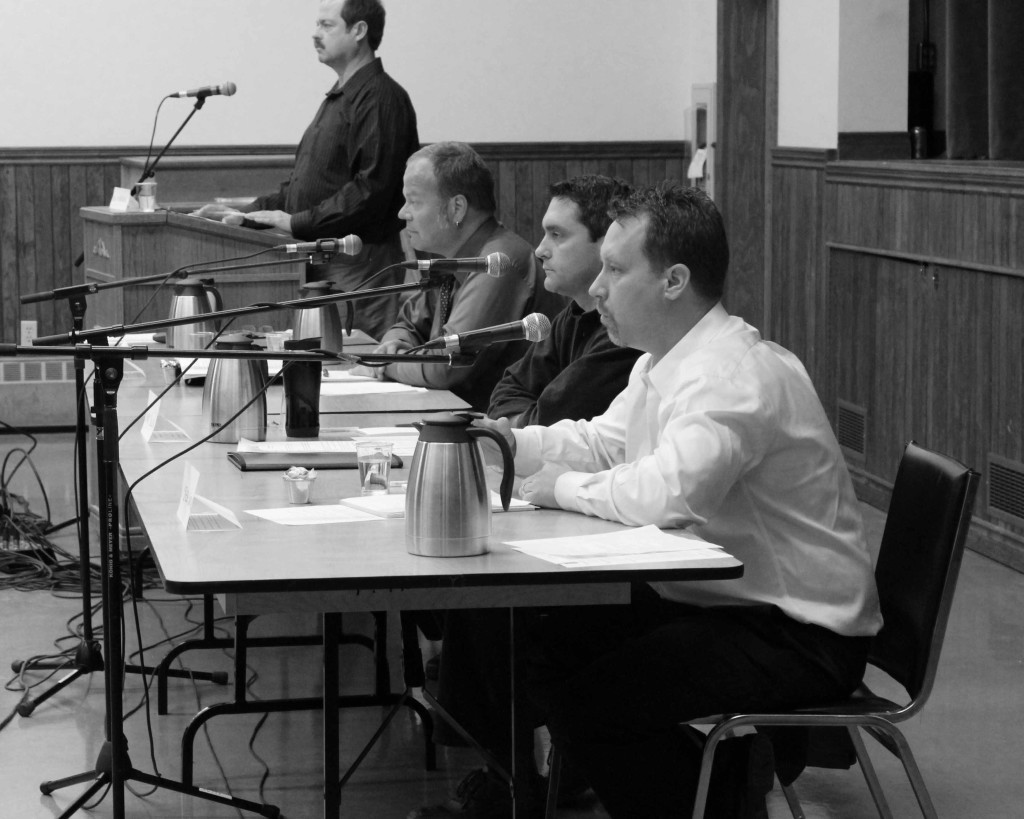 Story and photo by Alyssa Friesen

At Dawson City’s 2011 all-candidates election forum on September 28 at 7 p.m. at the Tr’ondëk Hwëch’in Community Hall, a full-house packed the building to question and hear the three candidates vie for Klondike MLA.

Steve Nordick, Yukon Party, was on the defence throughout the evening, while Sandy Silver, Liberal, took command of the discussion with applause-drawing promises, and Jorn Meier, NDP, though struggling with articulation, also emphasized change.

David Rohatensky, Parks Canada supervisor, was the moderator, leading a lively questioning period between the public and the candidates.

A continuous stream of public lined up behind the two mikes positioned on either side of the hall. Questions included the aging population, the hospital, the housing crunch, placer mining on Dome Road, childcare, a bus service, energy policies, addictions and mental heal care solutions, and ambulance services. Rohatensky also voiced questions collected from a public drop box at the post office.

At the climax of the debate, an hour and 20 minutes into the hour and 40-minute forum, Nordick faced an impassioned verbal attack from an audience member on the position of Nordick and his party on the Peel River watershed (a question which at first generated audience applause, and later laughter as the questioner continued to bombard Nordick with outbursts from his seat, unsatisfied with Nordick’s response.)

“Like a judge saying you’re guilty before he even listens to the court case, there is a process,” Nordick said. “What we need to do is sign the MOU signed by the four First Nations governments and the territorial government.”

“I think it is time that we have a government in place that is willing to work with the First Nations,” said Meier, given his chance to respond.

“It’s an insult to the process and the good people who are behind these five years of planning for the government not to sign on, and ask them to come back with another number,” added Silver.

Cutting off the public at 8:40 p.m., Rohatensky gave the candidates a 10-minute break before two-minute closing remarks took place at 8:50 p.m. The order followed the reverse of the opening comments.

Meier also gave his home phone number: “If I do get elected—write this number down, don’t throw it out—if I get elected I will be your employee.”

Silver thanked the Tr’ondëk Hwëch’in in Hän “for allowing us to take this forum in your traditional lands and also in your community hall” and asked the audience to “vote with your heads not just with your hearts.”

Finally, Nordick reinstated the economic loss the community of Dawson faced in 2002: “This town was bankrupt shortly after that. Are we better today then we were in 2002? Yes we are,” said Nordick.

The Yukon Provincial election takes place on October 11, and Klondike voters, the majority which live in Dawson and surrounding area, will cast their ballots. In 2006, the voter turn out was approximately 80 percent, with 898 of 1, 122 registered voters at the polls. Nordick was elected with 45 percent of the vote.