J.J. Van Bibber holds forth in the shelter of the S.S. Keno in July 2011. Photo by Dan Davidson

Dawson First Nation elder J.J. (John James) Van Bibber passed away on Tuesday morning, January 10. He had been medivaced to Whitehorse a few days earlier and was known to be in serious condition over the previous weekend.

While he lived the latter part of his life in Dawson, he grew up in Pelly Crossing and also lived in Mayo and Whitehorse as well as Dawson during his long life.His wife of 62 years, Clara, was a Dawson girl and niece-by-marriage Geraldine Van Bibber (Yukon’s former Commissioner) says that was how he ended up spending his last couple of decades there. He was a registered member of the Tr’ondëk Hwëch’in.

Remembered as a prolific photographer, J.J. began taking pictures at age 13 with a Jiffy Kodak 616 camera that he bought at a shop in Dawson City. He donated a vast store of photographs to the Tr’ondëk Hwëch’in in 2003, and 2005 saw some of them mounted as the summer display in the Gathering Room at the Dänojà Zho Cultural Centre. That display is now part of a binder that is available for viewing at the centre.

J.J. was also known as a storyteller, and loved to enthrall audiences with tales of his younger years.

The family did live on the land in his early days and J.J. spent many years trapping with his brothers. It was nothing for them to walk to Fort McPherson and back.

One of his favorite stories was about how the children came to school in Dawson. His father and mother put them on a log raft in Pelly and floated them down the river. with the oldest child being the one in charge, Ira and Eliza (known to all as Shorty) reasoned that there was no point in paying for boat passage when the river was running in that direction.

The kids would return by steamer when school was out. Geraldine Van Bibber says they stayed at St. Paul’s Hostel when they attended the Dawson Public School, but that they didn’t go for very many years.

She estimates that they only got as far as elementary school in terms of formal schooling, but they knew how to read and continued learning all their lives. 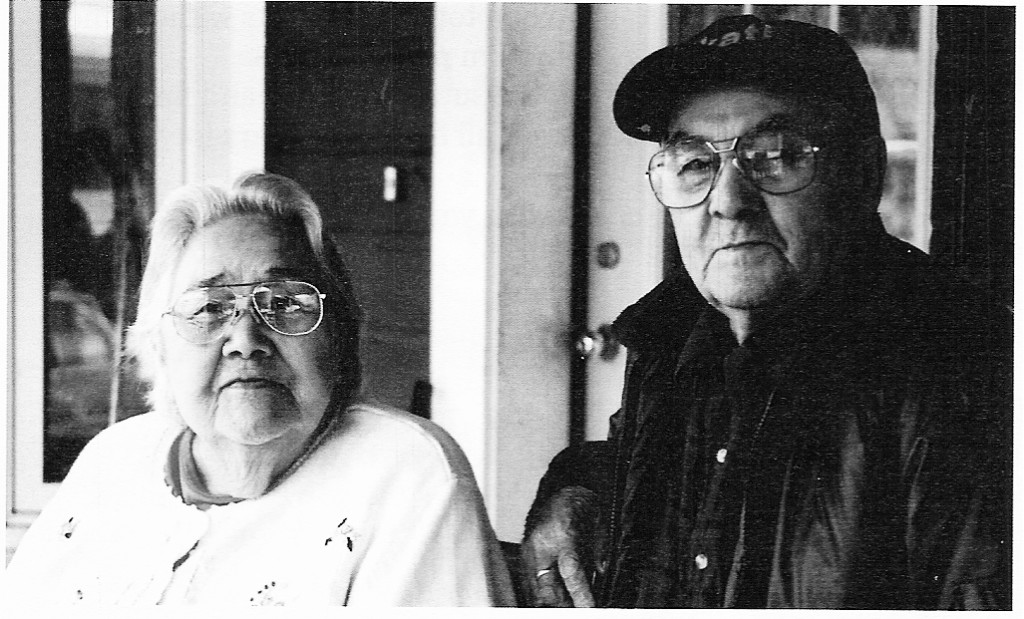 Clara and J.J. Photo provided by the Van Bibber family.

J.J. met Clara Taylor at 12 Mile and while his stories about just how they met would vary, he was always clear that he knew immediately that she was the one.  They were together until she died in 2004.

Besides trapping, J.J. had a store in the MacMillan area, ran heavy equipment, hauled trailers into mining camps, and took up placer mining in a serious way in the 1960s, when he was in his forties.

J.J. had many interests in life. He loved curling and enjoyed watching hockey either on television or at live games. The family notes that he attended his first live Canucks game in Vancouver when he was 90.

During the Second World War J.J. wanted to sign up, but his brothers (who did) told him he had to stay home, so he joined the Northern Pacific Rangers, 38th company, which later evolved into the Canadian Rangers. He was proud of that connection.

During the anniversary of S.S. Keno’s final trip to Dawson in 2010, J.J. captivated audiences with tales of running timber rafts on the river and sometimes being a spotter on the steamboats.

J.J. was a gregarious soul, and especially fond of having his family around. It was his wish to have family members present during his final illness and Monique Van Bibber says that they managed to fulfill this wish.

A funeral for J.J. Van Bibber was held at St. Paul’s Anglican Church on Monday, January 16, followed by a gathering at the Tr’ondëk Hwëch’in Community Hall.

One Response to J.J. Van Bibber, Master Storyteller and Photographer, Passes On