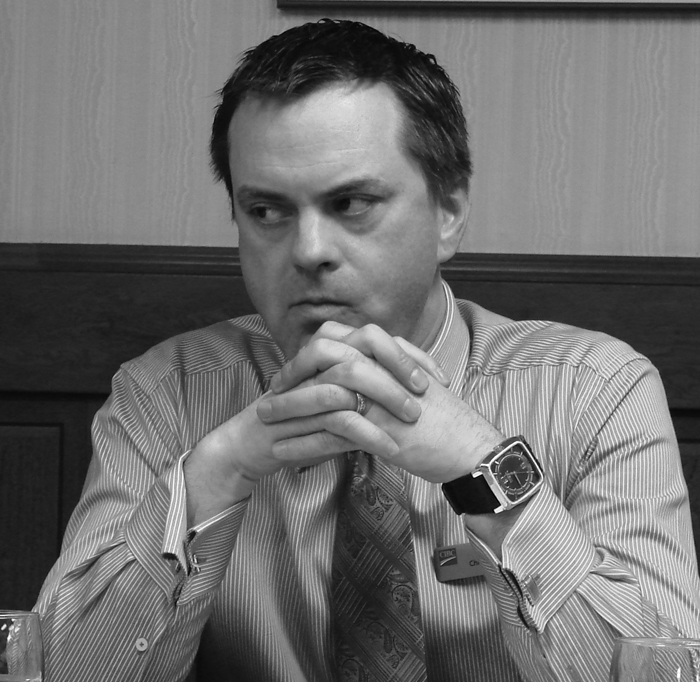 CIBC branch manager Christopher Tessier is most discouraged in his attempts to make cashing cheques simpler for Dawsonites who do not have local bank accounts. Photo by Dan Davidson.

Banking issues in Dawson provided a major discussion at the most recent meeting of the Dawson City Chamber of Commerce on February 8.
CIBC Branch Manager Christopher Tessier and MLA Sandy Silver were responding to a letter and an article published during the last month in the Klondike Sun. Complaints reported in the paper dealt with the inability of the bank to cash Yukon government cheques issued for a variety of purposes unless the person cashing the cheque had a local back account.
When a person cashes a cheque at a bank the cheque is not guaranteed by the agency that issued it, but rather by the bank account of the person cashing it, That is the case with government cheques too, unless, as with federal cheques, there is an agreement to indemnify the bank in case something is amiss.
In the Yukon the government has such an agreement with the Toronto Dominion Bank, which services most of the rural communities, except Dawson and Watson Lake. There is no TD branch in Dawson and so residents here do not have that benefit.
Silver said the easiest solution for anyone would simply be to have a local CIBC account, which would even allow the bank to waive the $4 service charge, but acknowledged that, for whatever reasons, some people do not wish to do so.
“Toronto Dominion, under contact with the Yukon government, must have an agency branch in any remote community that does not have its own bank,” said Tessier. “Therefore Dawson City has been disqualified from having an agency to deal with the government cheques strictly on the basis that CIBC is doing business here.”
Tessier said that the CIBC, at the national level and locally, has taken the initiative and the expense of drawing up a formal indemnity agreement.
“We’ve put all of the documentation together and have attempted to submit this to the Yukon government.  The Yukon government’s position at this point in time is that they are not interested in supplying CIBC with an indemnity to deal with our clients that are trying to negotiate cheques.
“Interestingly, Yukon government cheques before December 30, 2011, used to have a statement at the top which said that the cheque was negotiable at any bank in Canada without charge. The only way the Yukon government could enforce that was if they indemnified every financial institution against loss, like the federal government does, for up to $1500.”
Tessier said that both the government and finance dept. officials were apparently unaware of this written guarantee on the cheques until Tessier brought it to their attention. Instead of doing anything to remedy the situation, the government has chosen to remove that wording from its cheques.
The local branch of the CIBC now has a Dawson specific policy.
“I will call into the finance department,” said Tessier, “and if there are no stops and holds on the cheque we will negotiate it for a $5 cashing fee for non-clients. We are not turning people away. However, we have agreed with the government that we will only accept the risk … for up to $1500. Any Yukon government cheque over that amount would be subject to our standard hold policy.”
Silver described this as a classic example of a local business doing its best to serve its clients in spite of a government policy getting in the way.
Chamber members were very appreciative of the bank’s efforts on behalf of the community.