KVA Helps to Support the Government

A couple of special presentations were highlights at the annual general meeting of the Klondike Visitors Association on February 20.

The first presentation, made near the beginning of the evening, was a special retirement award went to Brenda Caley, who has held just about every board position there is since she first became involved with the KVA in the late 1960s.

“We did some archival research,” said executive director Gary Parker, “ and the written record speaks volumes. She has been actively involved in the KVA, through all the endless ups and downs, multiple times in multiple ways, including, but not limited to: as a board member, in lead roles are Chair, Vice-Chair and other executive positions; as a member on KVA standing and ad hoc committees in all of their many iterations over the years, especially the Marketing and Events Committee and the Gerties Committee, again, frequently as a steady hand in a lead role as committee chair, as a special event volunteer extraordinaire, planning behind the scenes and serving on the front line.

“She has devoted thousands of hours to the KVA over the last five decades. She is unfailingly generous, honest, wise, knowledgeable, capable, considerate, thoughtful, reasonable, reliable, patient, cool and calm.

“Speaking personally, and as KVA executive director, and as someone whose adult life has been spent in and around community organizations, I don’t know of anyone who has worked harder or longer, or done greater service, and there is nobody I respect more.” 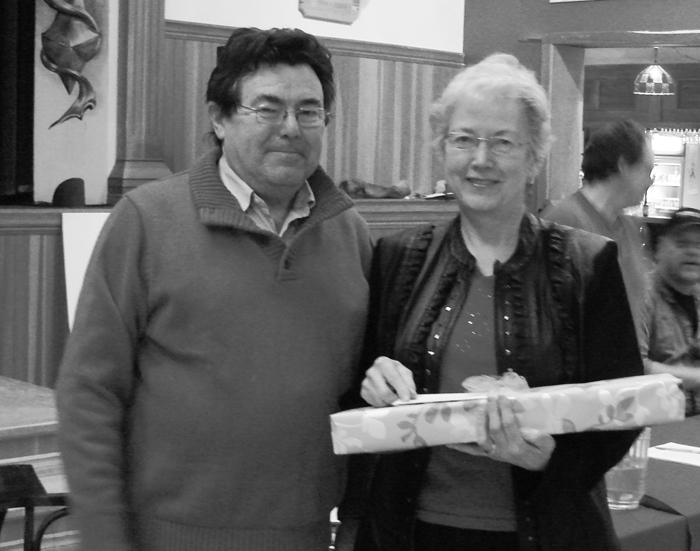 The assembled membership rose to give Caley a standing ovation.

Caley, not someone to hog the spotlight, smiled and said, “The KVA is definitely the most interesting organization in town. That’s for sure.”

The second presentation closed the evening and was a bit of lighthearted fun, a spoof on those big cheques that governments are always handing out to worthy organizations and projects.

The Yukon government takes a substantial cut from the slot machine profits at Diamond Tooth Gerties each year. In 2011 that amounted to $291,101.76, and that was the number inscribed on the big cheque given to Deputy Minister of Tourism Joy Waters by the KVA’s board members.

Read more about the KVA AGM, including the financial report, in the March 7 issue of the Klondike Sun.