Break-up on the Yukon River in front of Dawson occurred as 9:42 on a misty May 1 Tuesday morning. This is six days earlier than last year, but well within the range of normal breakup times and about five days from when the Klondike River cleared out at the confluence.

Workers in the Dänojà Zho Cultural Centre were alerted by Victor Henry when they arrived that he was certain the ice would soon go.

“The first thing I saw,” said Glenda Bolt, “was Victor Henry’s face in the window with a big smile on his face, saying, ‘It’s gonna go!’”

He has been walking up and down the dike for hours, and he was sure. Bolt and her co-worker, Kylie Van Every, made tea for few people and then stood on the deck and watched the river.

Bolt phone the IODE’s Joyce Caley and told her to be ready for a second call.

She also told her not to bring her ladder, because there was one at the centre.
The octogenarian official timekeeper for the ice pool has been known to cycle down to the centre from her Fifth Avenue home with a ladder strapped to the carrier of her bike.

About a half hour later Victor called out that it as moving.

That was the cable from the tripod tripping the wire that led to the clock mounted on the building where they were standing.

“We all went out there and we had a good old time calling people and hollering out.”
Bolt said she noticed quite a few people either calling or texting on cell phones this year, getting the word around town even before the siren sounded.

Within minutes there were crowds lining the dike from the old CIBC building and down towards the ferry landing. 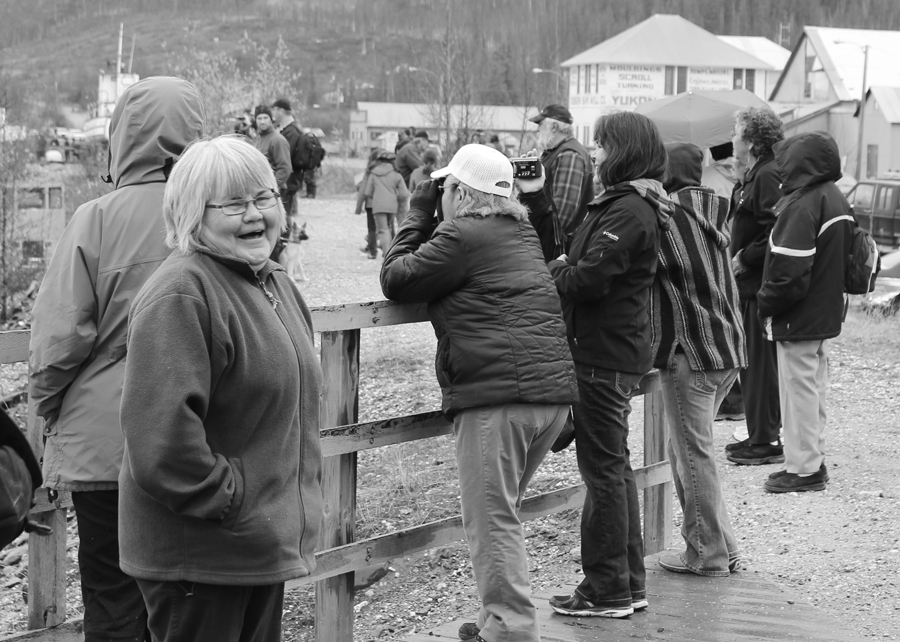 The excitement lasted for the better part of an hour, and there was some slight concern when it was clear that there was a bit of a jam down towards Moosehide, but the water in the river is low for this time of year and any backwash from a jam seemed unlikely.
Caley arrived and Bolt helped her take down the clock, verifying the time from its stopped hands.

Caley had to wait until she collected the day’s mail before making any announcements. The tickets that had been sold in Carmacks had not yet arrived and they needed to be tabulated to see if any one had picked a time closer to the one she already knew about.

It turned out they had not, and so Dawson’s Mandy Johnson was the declared the winner of approximately $3700.00 later in the afternoon.

Joyce Caley said it wasn’t a very exciting break-up, but agreed that safe is better than dramatic.