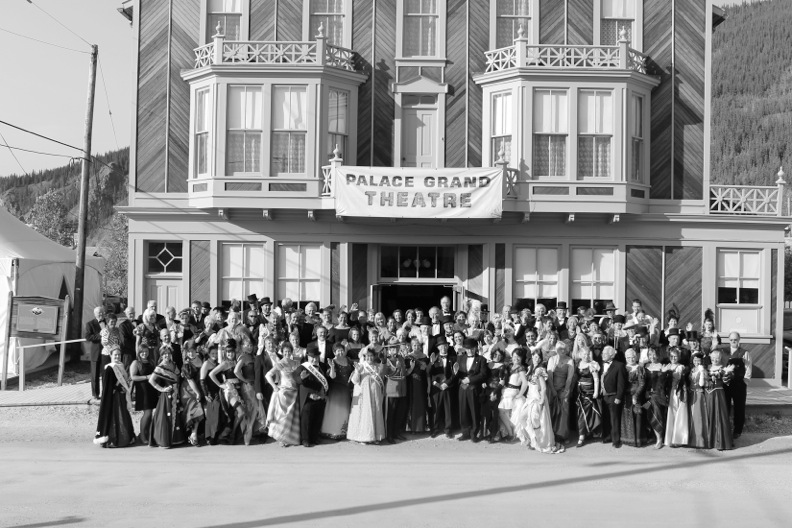 The group shot is always a popular event with locals and tourists.

What could possibly be a better time and place than the Commissioner’s Ball to launch a book about the Yukon’s Commissioners? No place at all, obviously, and so that was one of the main events at this year’s Ball, held in the Palace Grand Theatre on the evening of June 9.

This year Commissioner Doug Phillips made good on his pledge, made at last year’s Ball, to take over the organization and running of the event. There seems to be a rumour going around that the Klondike Visitors Association pulled out at the last moment, leaving Philips’ office to scramble. This is not the case, and the Commissioner offered thanks during his remarks to the KVA for lending their assistance in planning after their many years of running the Ball.

The receiving line began at 7 p.m. but for the “riff-raff” public on the street, watching from the steps of the Old Post Office, as local photographer Janice Cliffe organized the fancy dresses and formal tuxes into an arrangement that would do for the traditional group photo in front of the theatre, the event came to life at 7:50.

The procedure seems to resemble an attempt to herd cats, but Cliffe did manage to produce a stunning tableau once she got the group to stop paying attention to each other and face front.

Inside, the bar, being run by CFYT-fm this year, was open, and the folks in their finery milled about finding seats, snapping each other’s pictures and wondering when the assortment of appetizers, being served buffet-style this year by the Culinary Class of Yukon College, would be available.

When emcee Gabriela Sgaga managed to get everyone’s attention she introduced Phillips to begin the formal part of the evening inside.

Phillips introduced all the former Commissioners and members of the Yukon Legislature.
Referencing the lousy Whitehorse weather as a contrast with the gorgeous day June 9 in Dawson had been, Phillips floated a notion that was well received by the Dawsonites in the crowd, and by the visitors who seemed to outnumber them.

“Dale (Stokes, his wife) and I were wondering how the federal government would feel if we made the decision to move the Commissioner’s Office back to … Dawson. I have this little guy that sits on my shoulder that says to do these things that the federal government doesn’t enjoy, but I think I might just write and make the suggestion just to see what happens.”

Phillips offered special thanks and the presentation of a bouquet of flowers to the key members of his staff, Lindsay Hamilton and Lillian Loponen. While he said they didn’t know he was going to do this and he often does little things that surprise them, one of them was heard to say that he’d be surprised how little that actually happens.
Locally, Peggy Amendola, a member of the KVA, was cited as being of great assistance in planning the Ball. It was in fact, thanks to Peggy, and local seamstress Debbie Winston, that the Commissioner actually had legs to stand on at the Ball, for he had forgotten to pack the trousers for his tux when he left Whitehorse.

He spoke of the busy series of events that are ahead of him as Canada continues to celebrate the Queen’s Diamond Jubilee. So far he has awarded 29 Jubilee medals to deserving Yukoners and there will be more as the year goes on. Nine recipients were in attendance at the Ball.

“This fall I’m going to be embarking on a tour of 14 elementary schools from Old Crow to Watson Lake, taking the message of the history of the Queen in Canada to our Yukon children.”

Phillips, who has a long association the Rotary Music Festival and vowed to promote youth musical culture during his term, went on to introduce his musical guests for the evening, the Han Singers and Whitehorse flautist Robyn Guenette.

Following this Sgaga turned the room upside down by informing the guests that the floral centerpieces could be taken home by the person at each table who found a tag under their seat. Pandemonium ensued.

The formal part of the evening concluded with the official launch of Linda Johnson’s newest history book, At the Heart of Gold: the Yukon Commissioner’s Office, 1898-2010. The book and Johnson were introduced by Speaker of the House David Laxton, along with former Speak Ted Staffen and former Commissioner Geraldine Van Bibber, during whose terms the book was begun.

The evening continued with a dance to tune played by Yukon Jack, and no doubt some of the guests made their way to Diamond Tooth Gertie’s after the Ball.