35th Annual Museum Auction (and 50th Anniversary of the Museum)

“Well I spent far more than I should have at the auction,” said a relative newcomer to Dawson. “But it was well worth it. It is the most fun I have had since I got here.”

That was generally the tone of the evening of the auction held at Dawson’s Museum.

There was a good and lively crowd and there was a variety of items offered up in the auction.

But before you went up to the Court Room where the Auction was to be held, you were given a chance to renew your membership and drop your name in a box for a lucky draw. In the room to the left, the figures of Madeleine and John Gould presided over a table with photos from the 60s, as well as another table with artifacts from decades ago. For $2, you could enter the contest to write captions for the photos and write what your guess was for the purposes of each of the artifacts.

1962 was an  important part of the theme for this year’s Auction. It was 50 years ago that the Museum was officially ensconced in the old Administration building. This writer remembers it because, as a first time tourist to this area of Canada, I paid a visit to the Museum and marvelled at the many Eskimo prints they had on display and for sale. As well as being taken back in time, I tried to imagine a style of life that was so absolutely foreign to me.

The Museum has evolved and is evolving. But because the 1960’s was the beginning of the present Museum, all were invited to come in what they wore in the 60s. Hence we had Sylvie and Gary Gammie in their farming duds. Syliva Burkhard in a hat and wearing her grandmother’s necklace from that era. There were shoes and other items mostly worn by the ladies, and long blond braids, but the weather dampened a bit of creativity.

Refreshments were served. Nancy Rhyno created some of her Asian specialties while the creative cooks of Dawson brought in plates galore of their own creations. There was so much food, and although obviously diminished in quantity, Laura Mann, the Director, had to encourage people to return to the banquet. 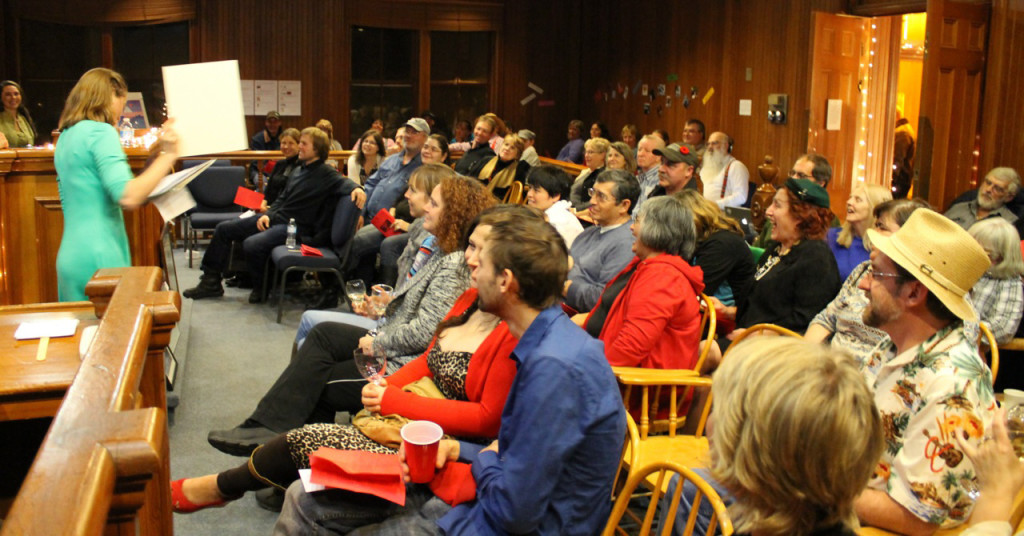 Upstairs a gold lame jacketed Christopher Tessier greeted each person and handed out the numbered sticks for the bidding. (The banker protested that he had been typecast.) Chris Collin handled the computer with the new idea of using Skype for telephone bids this year. Handy for our new Mayor, as he had to stay home with his sick family, but could successfully bid on a season’s pass for the swimming pool.

The very able auctioneer Paul Robitaille kept the bidding moving and the laughter going. Angie Bonnici and Allie Winton were the “Vannas” who displayed each item as it was called.

The items for sale ranged from beautiful home furniture, air flights, paintings, jewelry, services from many of the qualified people in Dawson, items or services from businesses, jewelry, home made crafts, and the silent auction had office furniture.

People were bidding eagerly. In fact, Gary Gammie and Sylvie Gammie were bidding against each other at times. Their friends Tina, Shane, Nadia and Sheldon bid against them or urged either Gary or Sylvie to bid higher against the other..

One item on the list raised a few questions and laughs. It was a donation by Dick Van Nostrand for a private plane ride on Air Dick, a company that no one had heard of before. It raised many hilarious questions.

Later a painting showing a lone eagle high in the sky was held up and Peter Jenkins was heard to ask “Air Dick?” More laughter.

The lucky person who could recognise the figures in the photos was Chuck Barber. Well, would you have recognized Bud and Esther Rogers, School Principal Mary Gartside, Maggie Bremner, or miner Harry Leamon from the 60s? He won a frame and could come to the Museum to pick the photo of his choosing from their several thousands to go into the frame.

The winner who identified the uses of the various artifacts was Dawne Mitchell. She too won  a picture frame.

There was one photo of a man in the winch room of the dredge with his hands on the round headed levers, and visitors were invited to give a creative title to this photo. Paul Robitaille wrote “This lever sends my wife flowers.”

But the judges’ favourite was Dina Grenon’s “I work with a bunch of knobs.”