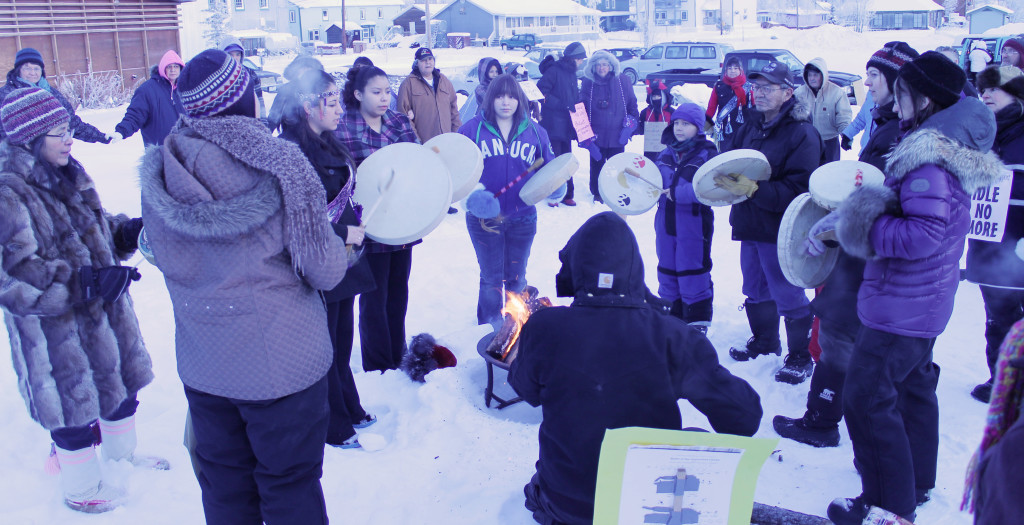 The Idle No More movement came to Dawson City on January 1, with a gathering held outside the Dänojà Zho Cultural Centre at 2 p.m.

Organizer Fran Morberg-Green addressed the crowd of some 50 folk, both Tr’ondëk Hwëch’in citizens and others, around the fire at the beginning of the demonstration.

She outlined the origins of the Idle No More movement, which began with four women both aboriginal and non-aboriginal, from Saskatoon. Sylvia McAdam. Jess Gordon, Nina Wilson and Sheelah McLean were moved by the contents of Bill C45, the latest omnibus bill proposed by the Conservative dominated federal government of Canada.

They saw the changes to the Navigable Waters Protection Act as another step in the devaluing of environmental regulation already begun in other actions taken by Prime Minister Harper’s government. First Nations people have a particular interest in the outcomes of such legislative changes, as they believe they violate specific portions of their treaty rights under the Canadian constitution.

The changes in Bill C-45 strip protections from 99 percent of lakes and rivers in Canada, leaving only three oceans, 97 lakes and 62 rivers under the purview of the law. This is a reduction from the old figure of 2.5 million. The act itself is replaced with the Navigation Protection Act, which title certainly suggests an entirely different emphasis from the original 1882 legislation.

Morberg-Green emphasized that gatherings such as this are intended to be a positive alternative to simply complaining about injustices, and that they were a way of making public opinion known to the larger community.

Tr’ondëk Hwëch’in concerns about possible developments in the Peel Watershed are connected, she said, to the larger issue, as is the hunger strike currently being carried on in Ottawa by Chief Theresa Spence of the Attawapiskat First Nation.

Signs carried by the demonstrators included mention of Idle No More, support for Spence as well as slogans such as “Save Grandmother Earth. She’s Counting on Us!” and “No Water, No Life!” 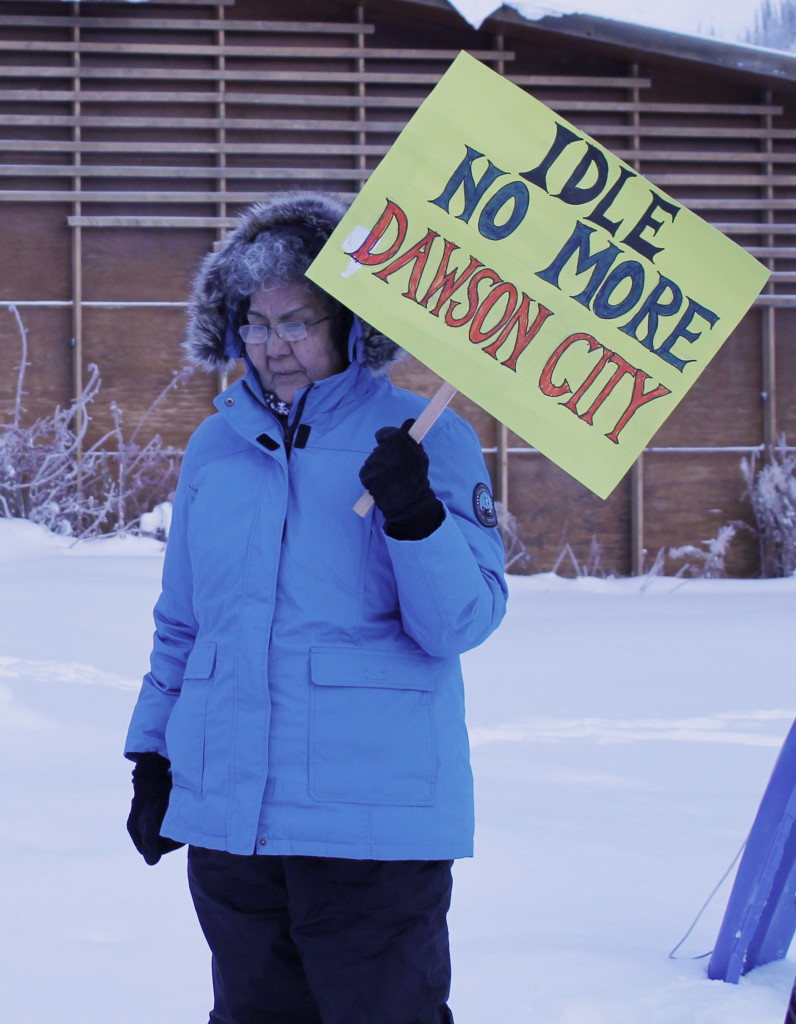 Doris Roberts with her sign. Photo by Dan Davidson

Morberg told the group to focus their attention on the positive outcome they hoped to achieve.

“I would like to thank Harper,” she said, adding that it was the Prime Minister’s actions on this issue that had stimulated people to take up a protest that seems to be sweeping across the country and even occurring in foreign lands.

Following her remarks the entire group formed a couple of circles with the drummers inside next to the fire, and joined in several traditional Han songs, as well as a chorus or two of “This Land is Your Land” and one from the Shuswap nation. Then the group was invited to dance around the circle, both to warm up (it was -16° C) and to celebrate the gathering.

The next gathering is scheduled for Friday, January 11 starting at noon outside of the Gazebo on Front Street. See the event Facebook page “INM Dawson City” for more information.