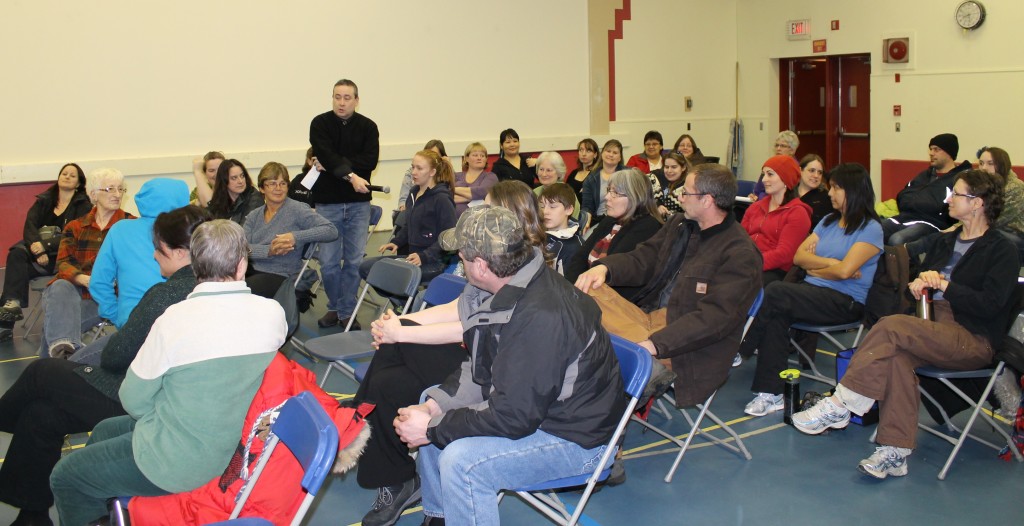 Mayor Wayne Potoroka moderated the meeting and passed the microphone.

Valerie Royle, Deputy Minister of Education, didn’t have to face a hostile crowd in Dawson City on Wednesday night, January 16, but the 50 plus people in the room did politely but firmly reject most of the arguments that she put forth in favour of changing the school calendar at the Robert Service School.

Parents, concerned citizens, teachers and students did not particularly mind the idea of increasing the number of days and hours in the school year as long as the changes did not involve running the end of the year into the month of June.

Dawson rejected the idea of school in June nearly 20 years ago when the Partners in Education school act gave school councils the right to advise the Minister of Education as to what the school calendar would be in each school. Since that time, in Dawson, the school calendar has been derived in a collaborative process involving staff and council, and the minister has always accepted the resulting decision.

Robert Service School begins the day after Discovery Day, and runs each day 10 minutes or so longer than the Yukon average to make up the currently required 935 hours of instructional time, with an additional 15 hours set aside for professional development or administrative activities.

The proposed changes would bump the instructional hours up to 950 and add another 15 hours for training opportunities. These hours would be spread over 191 days in total, with 185 of them being instructional days. Presently the instructional days in schools vary from a low of 173 to a high of 181.  Dawson’s school year is at the high end, with 180 days.

When the school moved to its present calendar in 1991/92, it was after a year’s worth of planning and consultation with the community, with the final decision based upon issues of daylight hours in June, local job opportunities for high school students, a long history of spotty June attendance and numerous other factors in the community.

The earliest ending date given on the seven options presented to the school councils is June 5.  Other options run from June 12 to June 25.

June, as parent after parent said in the meeting, is a terrible time to be in school in Dawson City. Speaking to the same issue, business owners indicated that later closing dates reduce the chances of them being able to hold summer jobs for local students during the town’s busy tourist season, which begins in May and is in full swing in June.

Grade 11 student Christina McIntyre pointed out that students need all the summer job time they can get in order to raise the money to pursue their post-high school educational plans, whatever they may be.

The proposal being made by Yukon Education is, Royle said, aimed at increasing the success and graduation rate of all students by bringing the school year into line with the average across the country in terms of number of days and hours.

Royle kept emphasizing that the Yukon graduation rate of 70 percent (highly criticized by both the Auditor General and the Fraser Institute) was one of the main reasons for this proposal, but that didn’t score very highly with the audience in a town where approximately 90 percent of high school students graduate regularly.

Standardizing the high school calendars across the territory (because this is mainly about high schools) would provide a number of opportunities in terms of distance education options and dual tracking with courses available from Yukon College. 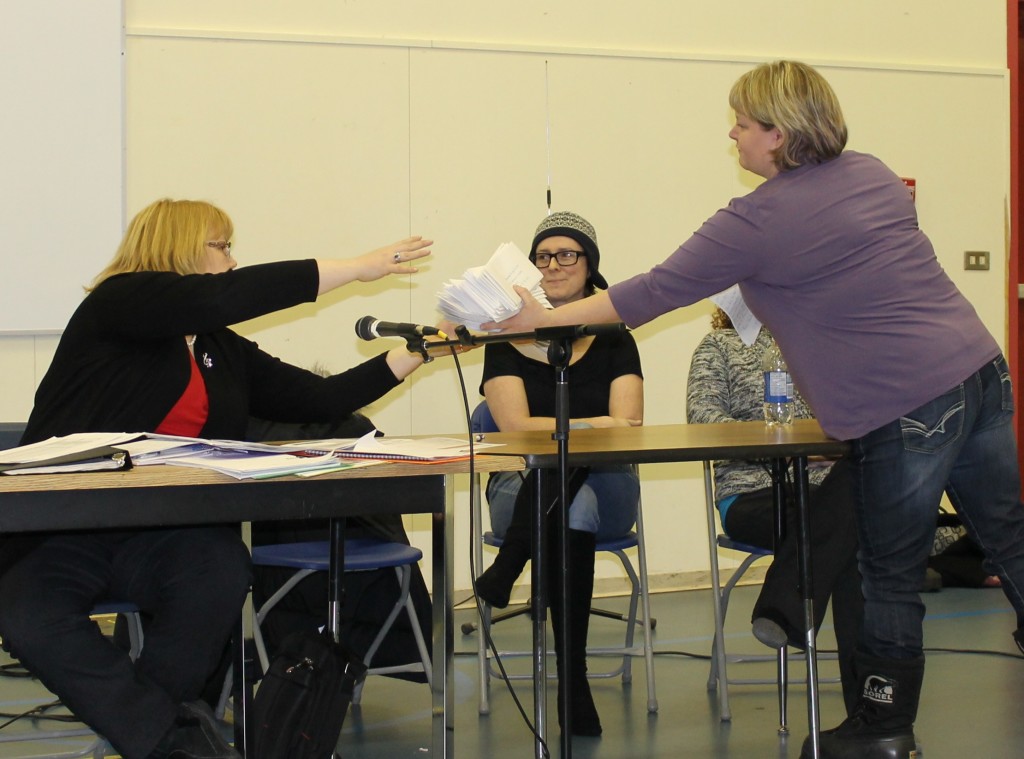 Parents wanted to know what impact a common calendar would have on such locally developed programs as Han Language and the Intensive French semester, as well as all the other cross-cultural First Nations related programs that have begun to develop here in a major way over the last few years. Royle seemed to think that a lot of these were elementary programs that would not be affected, but that isn’t actually the case.

Former teachers and school council members who spoke out against any plan which would alter the system RSS has been using successfully for two decades were surprised several times by the applause that broke out from the audience.

Royle was presented with 132 signed letters that argued against any changes and was told she could expect at least another 50 within a week.

School council chair Sue Lancaster reported that only one Dawson resident had approached her in support of the proposed changes. A number of people in the audience pointed out that they had chosen Option 6, with the June 5 ending date, only because it seemed the closest to what was already in place and the issue had been presented as if they had to make a choice.

Edith Henry said she wrote in “none of the above” because that’s what she felt was right.
Most people who spoke were critical of the timeline for studying the options. Royle pointed out that calendars have to be set by March. Since this just became a public issue in December, people felt that there wasn’t enough time to make a good decision.

School councils received the minster’s letter on December 11 and had been asked to provide feedback by January 11, a deadline that was later extended to the end of the month. Dawson’s council responded by holding a hot topic night on January 9 at the Fry Arena and debating the issue at its regular monthly meeting the next evening. At that time they refused to make a choice without holding a public meeting at which either Minister of Education Scott Kent or someone from Yukon Education would be present to present information and answer questions.