Web exclusive: Gingerbread Competition A Feast For the Eyes

The Klondike Sun always takes a holiday break in December, to let our volunteers enjoy festivities as much as everyone else. But there’s so much going on in Dawson in December that we wanted to share at least this one story between our Dec. 16 issue (the last print issue for 2015) and our Jan. 13 issue (the first print issue for 2016). Here’s Molly MacDonald’s take on how Dawsonites made and responded to recent gingerbread house delights. 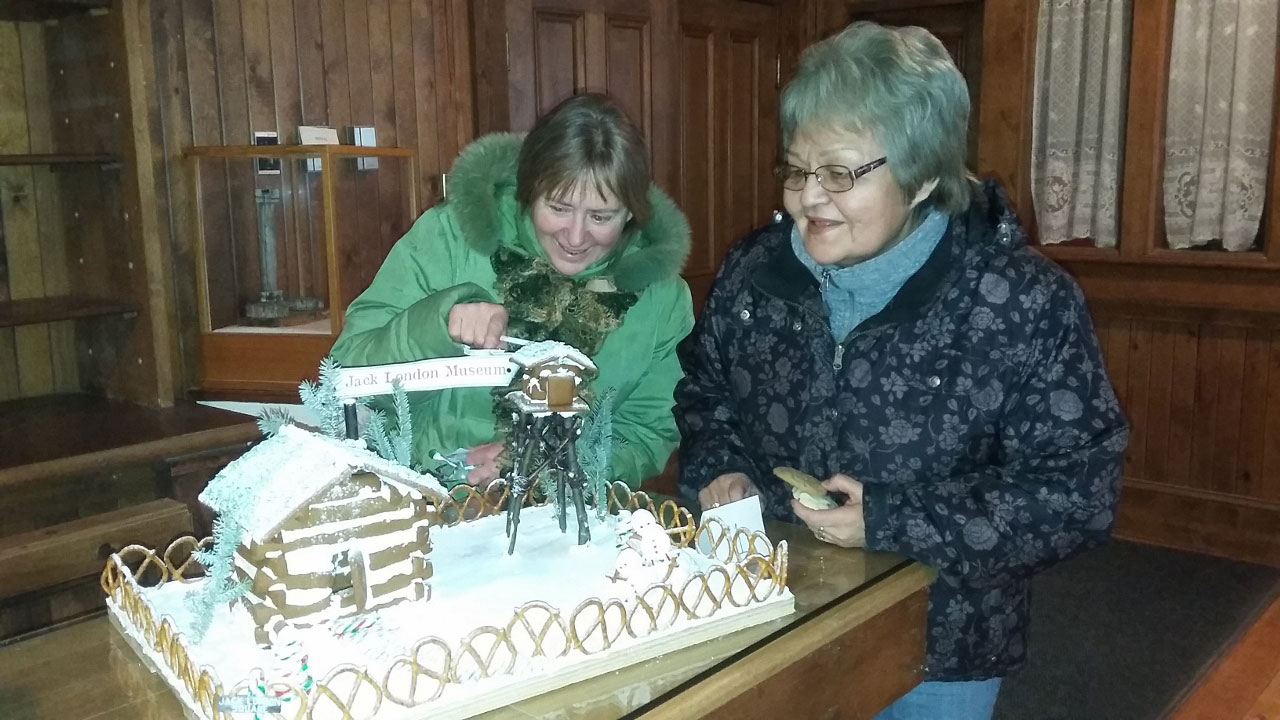 No winter-worn Hansel and Gretel could have resisted the holiday cheer swirling around the Visitor Information Centre at Dawson’s first annual gingerbread house competition, December 11th and 12th. With the fragrant perfume of cookies and apple cider filling the air, Dawsonites marvelled at the confectionary genius of their fellow citizens, and cast votes for their favourite gingerbread creations. 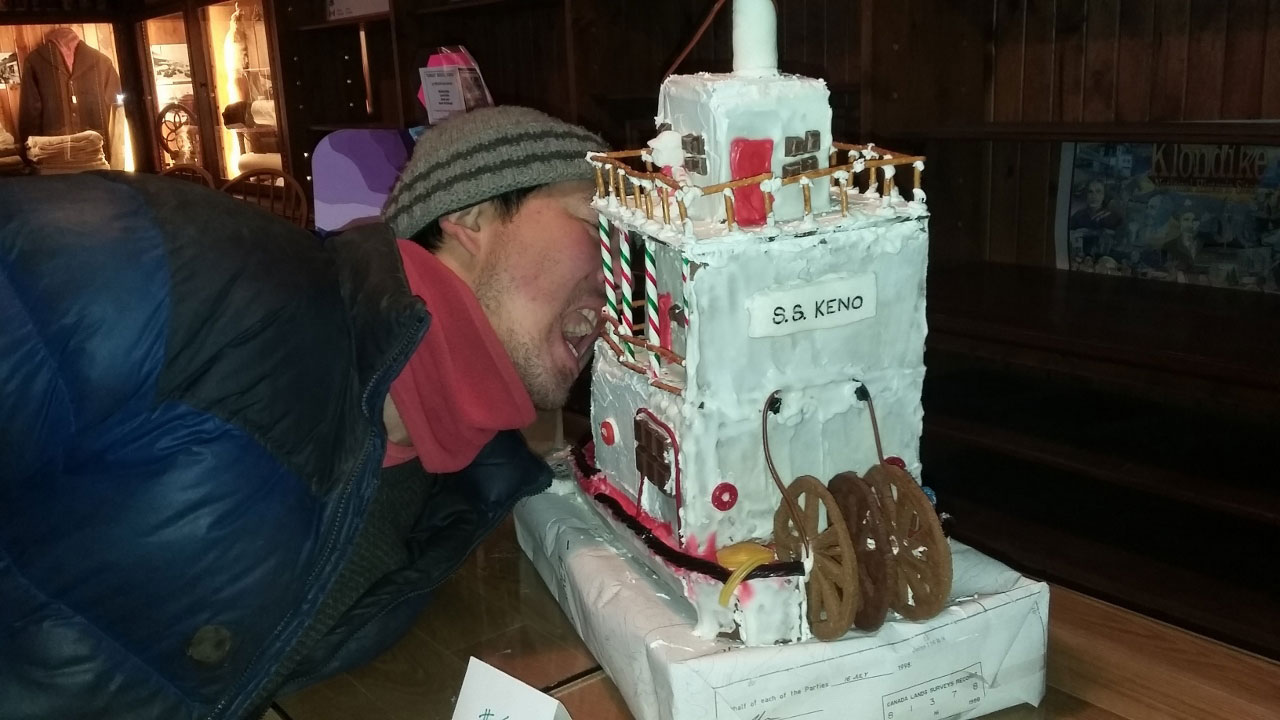 A total of seventeen entries were submitted in six categories: child, youth, teen, adult, family, and Corporate Challenge. All of the entries were mostly edible and fifteen were made from homemade gingerbread. Over the course of the weekend about 200 Dawsonites cast votes in the competition, making it an unqualified success. The winners were announced on Sunday afternoon.

Organizers Janice Rose and Tarie Castellarin were delighted with the community’s enthusiasm for the new event. Inspired by a similar competition in Skagway, Alaska, Rose and Castellarin thought this was a tradition worth importing. 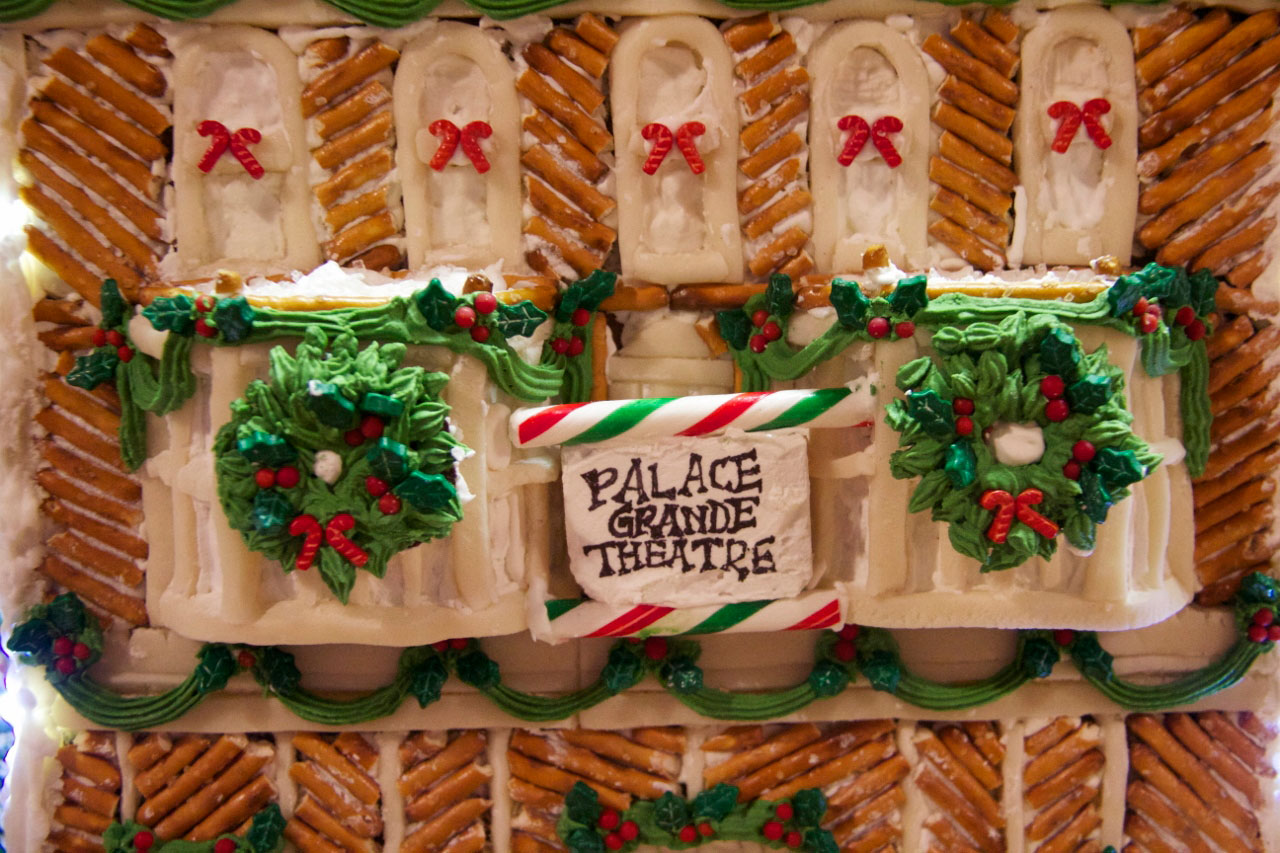 “Skagway has fewer people than Dawson in the winter,” Castellarin noted. The pair figured that if Skagway could support a gingerbread house competition, so could Dawson.

Clearly the community agreed. Six-year-old Cecilia Hastings said that the competition was “a fun opportunity” for her family. Cecelia and her siblings, James and Autumn, worked together to create an edible version of their family farm in Henderson Corner, complete with icing sugar piglets, chickens, rabbits, and even a gingerbread moose! 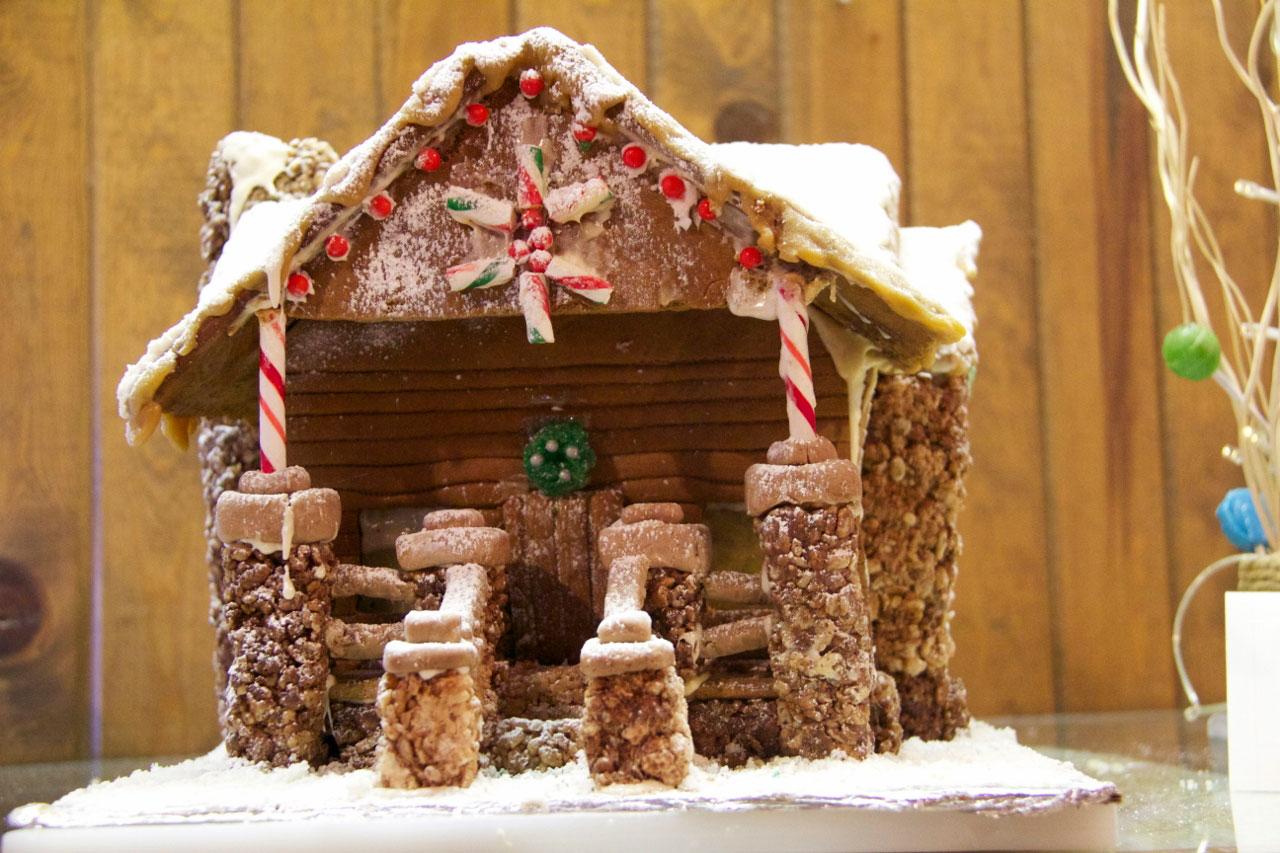 Karen Gabryelczuk and her granddaughter, Jaden Ezzard, also worked on their entries together. “She did hers all by herself though, “ Gabryelczuk insisted. “We were just in the same room. It was fun, something we will never forget.” Jaden’s house took first prize in the Youth category.

Gabryelczuk’s own gingerbread house was a masterpiece in the California Craftsman style. The main house was clad in gingerbread clapboard, with chunky stone piers (fashioned from Rice Crispies and marshmallow) holding up candy cane pillars and a low-sloping roof.

When asked about her 100% edible design, Gabryelczuk explained that she wanted to build a house that she would want to live in. She found her inspiration on the Internet. Would she do it again? Gabryelczuk laughs. “I said to my husband, please when I say I want to do this next year, remind me. I was having nightmares about the roof falling in!” 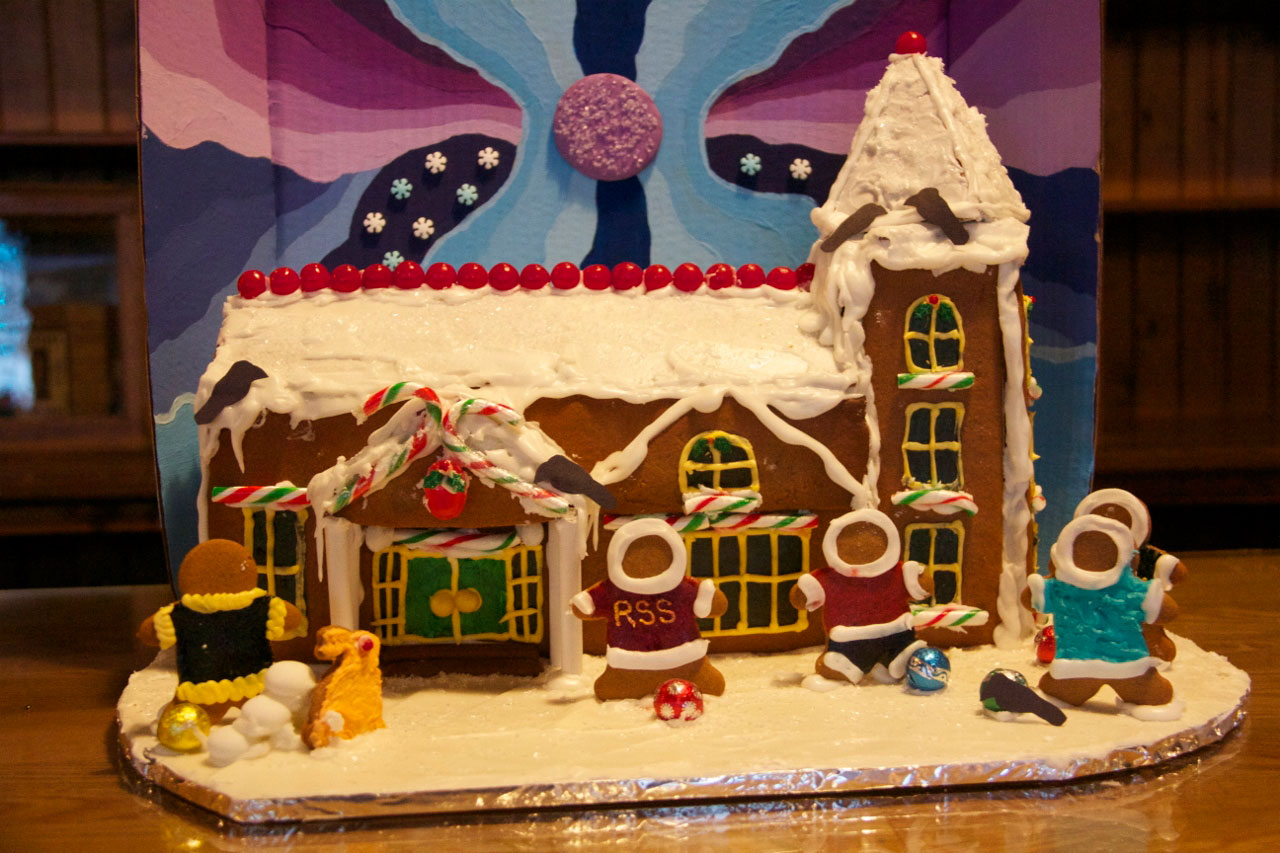 Dawson’s businesses and organizations also got in on the fun, with five entries in the Klondike themed corporate challenge. McDonald Lodge’s staff used frosted Mini-Wheats to create a snow-dusted thatched roof, and ornamented their gingerbread gable with chocolate-covered pretzel moose antlers. Jack London Museum’s sod roof was also clever: it was made of dyed green coconut. 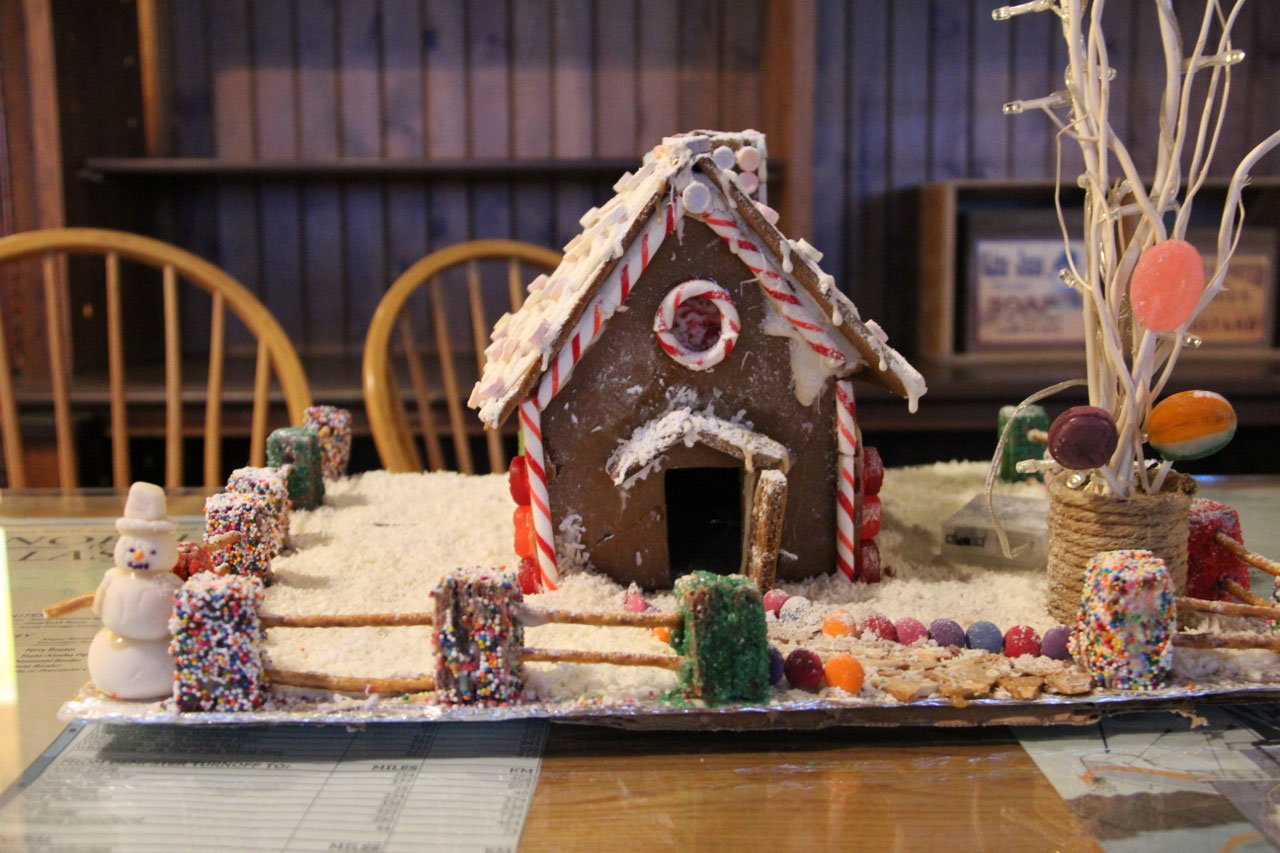 As a town known for its artistic leanings and aesthetic charm, it is no surprise that Dawson did up the gingerbread house competition in architectural style. Imperfect homemade gingerbread provided an ideal medium for constructing wonky Klondike-inspired cabins, though it is worth noting that the lack of heritage bylaws must have been very freeing for all participants.