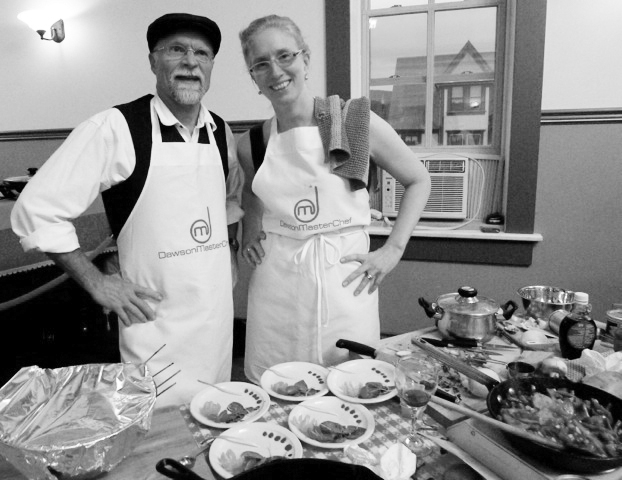 KIAC hosted the first Dawson Master Chef Cook-Off on Friday September 14. Five pairs of Dawson “chefs” competed for the coveted prize of two Golden Chef’s Hats. Their purpose was to raise money for school lunches for the Maasai children of Elerai Tanzania. Kath Selkirk, Jim Taggart and Maureen Abbott, all from Dawson, volunteered in Elerai this past winter for The Kesho Trust, and the Maasai stole their hearts. (www.keshotrust.org is a mostly Yukon-run organization.)

Their chef station was lit with flashing lights and indeed, if there had been a prize for the best props, they would have won it. Their final dish was served on flattened fire hose and was definitely not burned to a crisp.

Glenda Bolt, an Emcee along with Eldo Enns, eloquently described the other contestants. Sandy Silver and Xander Mann were the “Kubasa Kings of culinary concoctions”. The “spice of life on every table in town was the Salt and Pepper mix of Lue Maxwell and Charles Hume”. The chef and his muse – um nurse – were Gord MacRae and Ann Bragg – “the Poster Children for Canada’s Food Guide.” Lastly, “the Duke and Duchess of Delicious representing their homeland deep on West Bank of Dawson”, were Marta Selassie and Mark Dauphinee.

The teams were given four secret ingredients and were allowed to bring three of their own. They shared a common pantry of foods and spices and in one hour, had to create a meal that would be judged on Presentation, Flavour and Creativity. This was a demanding task to be performed on only two hot plate burners each and one BBQ that was outside and down the stairs. All along, the KIAC staff crossed their fingers that a fuse would not be blown. This was no over-equipped kitchen. 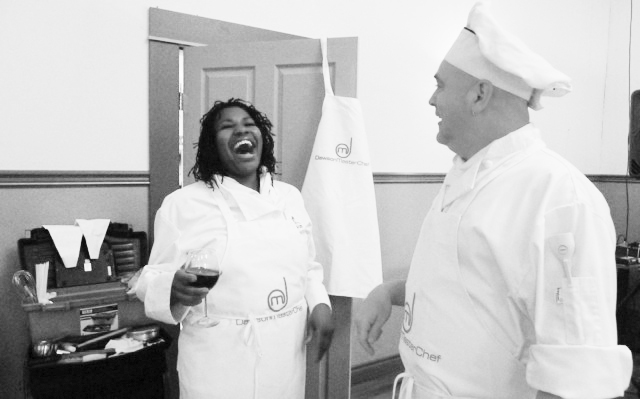 The live CFYT radio commentator team of Paul Robitaille and Steve Laszlo left their hockey jabber behind and used their culinary curiosity to keep track of the action at the chefs’ stations. Deliberations and discussions ensued as the pairs of chefs hunched over their mystery ingredients and perused the pantry, followed by choosing, chopping and cooking – by various methods – a wide variety of very tasty morsels and concoctions. Big fingers delicately arranged the plates with care and finesse.

At last the winners were announced – and much to their surprise, the poster children for Canada’s Food Guide – Gord MacRae and Ann Bragg were crowned with the gold lamé chef’s hats, created by Debbie Winston. The pair claimed their win had much to do with their fabulous presentation of delicately carved cherry tomatoes, a coconut rice boma (mud hut) on spinach leaves, a colourful vegetable array of madras curry, a dry rub on the BBQ’d lamb and a spotted glaze on the white plate, of raspberry hot pepper jelly laced with birch syrup. 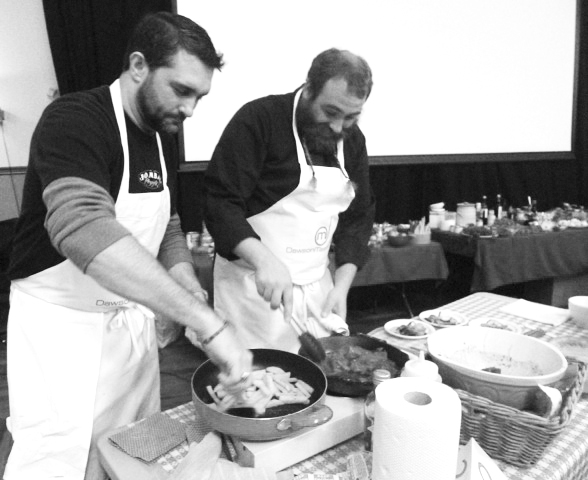 The event could not have happened without the dedicated volunteers and the generosity of the prize donors. Bonanza Market donated the secret ingredients and the General Store gave $100 of food for the pantry. Twenty-two prizes were donated by individuals and businesses in Dawson and Whitehorse and we thank you for your generosity and spirit.

These prizes were raffled off to the crowd and added greatly to the excitement of the evening. See our Facebook page “Meals for Maasai Dawson Celebrity Chef Cook-Off! Fund Raiser” for descriptions of the fabulous prizes and generous donors and for more pictures of the evening.

MOST IMPORTANTLY, the town of Dawson raised $3350.00 for the 320 school children of Elerai, Tanzania. This will provide the children with lunch for 2 years (the parents contribute half) and will make a huge difference in their ability to learn. Some of the children walk 8 kilometres a day to school on an empty stomach and without the school lunch, many would not eat or drink until the evening meal. These are lovely kids, polite, big smiles and they are definitely grateful for this meal. Some of the money will be put towards a rainwater collection tank at the school so the children can have water at lunch as well.

THANK YOU DAWSON – all the volunteers and donors and organizers for making a BIG DIFFERENCE in the lives of the MAASAI Children of Elerai, Tanzania.