These rangers received awards for six and 12 years of service

The Dawson Rangers completed a 12-Day Training Exercise during February and a Graduation Parade was held on February 29, with Sergeant Bill Cornish from First Canadian Ranger Patrol Group in Yellowknife as their trainer and special guest, and Tr’ondëk Hwëch’in elder Peggy Kormendy assisting with the presentations.

It was also a time to catch up on a number of overdue presentations.

Brian McDonald received the St. John’s Ambulance Award for saving a life after a snowmobile accident endangered a fellow ranger.  McDonald and three other rangers received the Commander’s Pennant for their role in this rescue. The others were CPL Bob Blanchard, RGR Melina Tessier Fontaine and RGR Corrie Loewen. 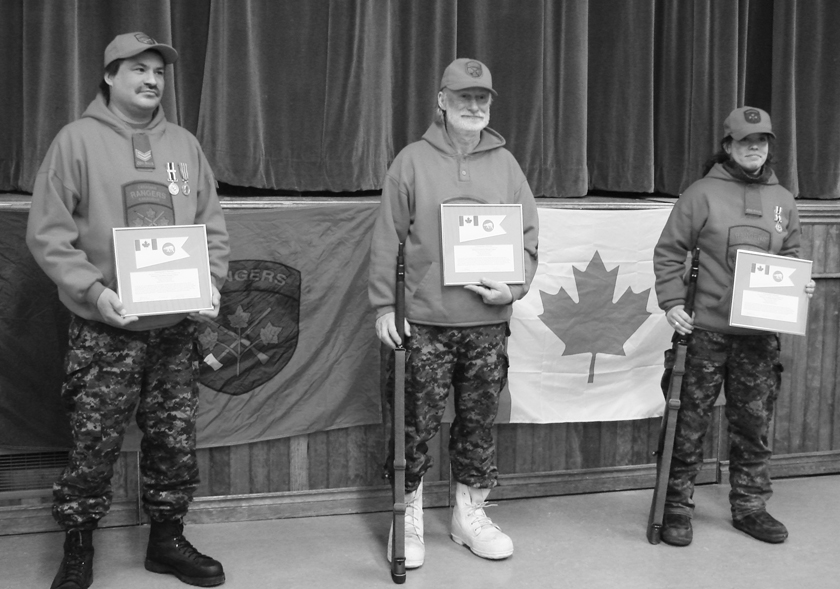 McDonald led in the administration of First Aid that stabilized the victim for transportation by helicopter from the scene of the accident to the hospital. Blanchard, Loewen and Fontaine assisted McDonald with the first aid and cut a chopper pad for medivac. Fontaine accompanied the victim as a First Aid attendant on the flight.

The crew also recovered the damaged skidoo, brought it to town and assisted in repairs.

The citation, by Brigadier General  J.J.K. Hamel, Commander – Joint Task Force North, read, “For the prompt and continued application of First Aid … ‘that’ … prevented a major injury from turning into a life threatening situation.”

“The training is in response to the increased risk of an avalanche incident as we push patrols into new areas of operation along the Dempster Highway.

“This was a pilot project for 1CRPG. The course was a great success and another course is planned for the other Yukon Ranger Patrols in March.

“In terms of participation this was our largest ever since our standup in 1991,” Mitchell said. “A total of 31 Rangers were out on the land operating in Five Sections, including five new recruits: Phillippe Bartholemous, Ron McCready, Jarred Mather, Kevin Hastings and Scott Widmeyer.”

All the participants in Operation Mate, with trainer Sgt. Bill Cornish on the far right

During this Exercise the Rangers:

• conducted numerous local reconnaissance patrols in the vicinity of Cache Creek and did a Patrol strength Search and Rescue scenario.

“The Exercise was named Operation Mate, in memory of Ranger Jack Semple, who left us this past summer. A simple ceremony of remembrance was held in his memory at the conclusion of the Exercise.

“It was an excellent Exercise; the instructor was pleased with the performance.

“We’d like to thank the Tr’ondëk Hwëch’in for their generous provision of the Community Hall for the class room training and the use of the Cache Creek site for our operations base.”