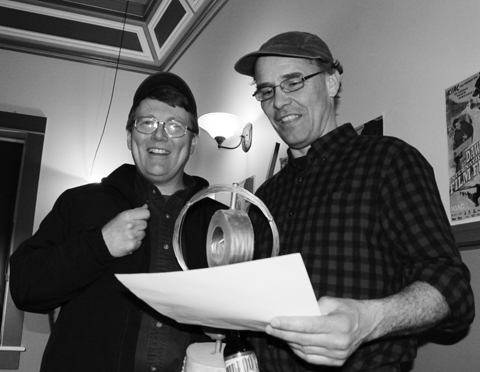 It wasn’t any great surprise when Daniel Janke’s documentary film “River” won the Made In the Yukon (MITY) Professional Award at the end of the 13th edition of the Dawson City International Short Film Festival. The film about life on the Yukon River during the steamboat era was well made and quite moving.

What was surprising was Janke’s announcement when he came to the microphone to accept the award from Dawson City Arts Society president Peter Menzies.

“I made a decision,” Janke said. “I feel like I’m living in privileged times and I’m a very privileged person. I’ve won this (award) twice; this is the third time. So I decided to give the cash prize to an emerging film maker.”

At the time he didn’t know which of the MITY emerging artists that might be. Festival producer Dan Sokolowski says there will be some consultation on that subject before a decision is made.

First prize in the professional MITY category includes $1, 000 cash, a $1, 000 equipment rental from the Northern Film and Video Industry Association (NFVIA) and a guaranteed screening at the 2013 Tromso International Film Festival in Norway.

The second prize in the MITY Pro category went to Veronica Verkley and her hilarious film, “The Working Cats Guide to the Klondike”. Verkley created a mock documentary using live action, faux interviews and photo-shopped archival photos to reveal the secret history of when cats were used for mushing sleds and what the real “cat trains” were all about. 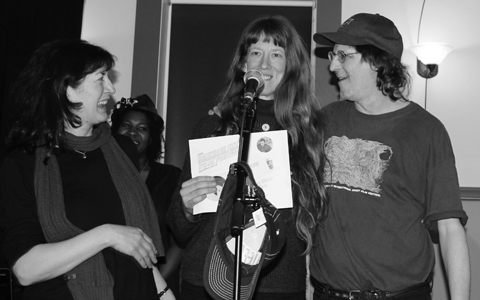 Second place, offers $500 cash and $500 worth of video equipment rental from the Klondike Institute of Art and Culture (KIAC).

Verkley’s film brought down the house during the Friday evening showing and it was no surprise at all when it also took the $500 Audience Choice Award on Sunday night.
Honourable Mention in the MITY pro category went to “Fragments” by Neil MacDonald and David Hamelin. In this eight-minute horror story, a meteorite fragment causes a curious young girl to become ill and transforms her into a zombie.

There is also a MITY Emerging Artist category, First Prize, including $300 in cash and $500 worth of KIAC video equipment rental, went to “The Provider” by Moira Sauer. This was a six-minute entry about one woman’s solution to meeting her need for companionship in the midst of a wilderness winter with no company but her sled dogs. Sauer commented that this 48-hour film contest product featured the only time her dogs had ever been indoors. 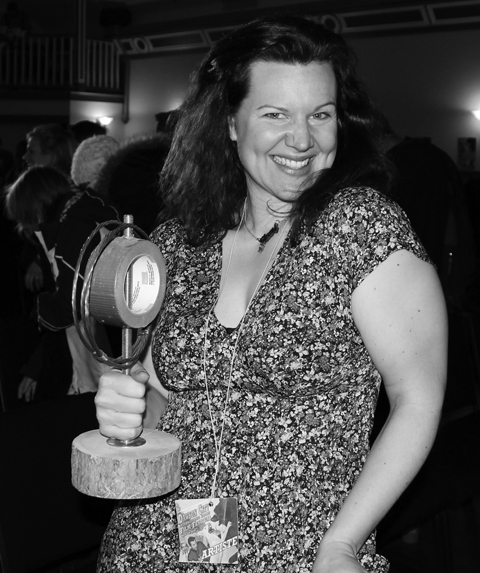 Second prize, which is $200 in cash and $400 worth of equipment rental, went to “How to Make a Marshmallow and Peanut Butter Sandwich” by Kathryn (Kit) Hepburn.

Jay Armitage took honourable mention for his short film “Coming this Fall”.
In the MITY Youth category the $100 cash prize went to a group of Tr’ondëk Hwëch’in youth who animated “The Story of Crow” with the assistance of adults Kerry Barber and Chris Clarke. The kids involved were Liberty Anderson, Arianna Rachel, Tay-Lynn Mierau-Charlie and Jaden Anderson.

The Lodestar Award went to “Throat Song” by Miranda de Pencier from Nunavut. In this film, a young Inuit woman seeks to reclaim her voice, which she has lost while living in a toxic relationship in a town that has had its cultural heritage amputated. The horrors she witnesses as a caseworker in the territorial justice department are amplified by the abuse she suffers at the hands of her own partner.

This award features $500 in cash and a Sterling Silver DCISFF pin.

Each year artists compete to create the television public service announcement that will be used by CBC North for this event. Each screening over the weekend begins with one of the entries, but this year’s winner for broadcast was created by Moira Sauer.

The weekend also has a number of features besides the screening of over 100 short films.

Sokolowski wears a variety of different baseball caps from his collection during the weekend, and there is a prize for the person who can list them all in the order they were worn. Meshell Melvin won for the third year in a row, causing Sokolowski to suggest she might be stalking him.

There was the opportunity to make a one-minute film during the weekend, planning and shooting a film  “in camera” (no editing allowed) with one of the iPads available for use from KIAC. The results of this challenge were be shown at Gerties on April 14.

Students from the Yukon School of Visual Arts kept the latter part of Sunday evening (while the Audience Choice award was being tabulated) interesting by setting up several tables with a line-up of MacBooks displaying film loops they had created with “found footage”.

During the weekend there were master classes in filmmaking offered by Peter Lynch and Guy Édoin, as well as a Street Feast BBQ and Karaoke provided by chef Georgia Hammond and festival guest Curtis Grahauer.

And that ended the awards presentation, at which point it was well past 11:15 p.m. A number of people took their cue from the DJ Whitebread’s decision to begin the closing dance party with an old Michael Jackson tune and “beat it”.