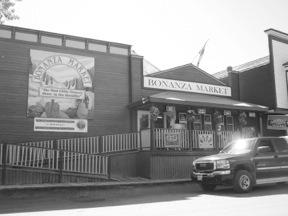 The road washouts that shut down the Alaska Highway between Watson Lake and Teslin, and again around Kluane Lake, were experienced rather differently by Dawson’s two grocery outlets.

For Paul Derry, at the Bonanza Market, it was pretty much business as usual. His supply truck got through on June 14 before the road washed out early Friday morning and the next one on his schedule was just a day late after the frontier road through the washout area restored service on Monday morning.

“It was pretty much like what we’d have on a holiday weekend,” said Derry last week. “Everything was a day late.”

For the Mark, June and Carla Mather at the Dawson City General Store the situation was a good deal more complicated. Mark Mather and his daughter, Carla, were on their way home from a quick trip up the Alaska Highway about midnight on Thursday when Carla says they watched the road start to vanish in front of them.

“We were the first people on the scene,” Carla said, “and the road just kind of washed away.”

She has video on her iPad of the water surging across the road beside Kluane Lake where extensive work has been done in the past to prevent just this sort of thing. It’s worked pretty well since 2008, but not this year.

To get home, the Mathers had to back out of the washout area, turn around and go back through Beaver Creek, up to Tetlin Junction and home over the Taylor/Top of the World route, a trip complicated by the fact that Mark didn’t have his passport with him. Back in Dawson June faxed a copy to the US border stations and that, along with an explanation, got them through.

By that time the Mathers were aware of the washouts at the southern end of the territory, and knew that the grocery truck that had been scheduled to arrive in Dawson on Saturday morning wasn’t going to make it.

Their own experience made them acutely aware of the problem they were likely to be facing. Their truck arrived in Watson Lake well after the road shut down.
“We weren’t going to be in dire need of groceries,” Carla said, “but we were going to be in need of fresh produce, milk and meat.”

By Saturday morning Mark was looking for information and went to MLA Sandy Silver to get the names of government people he might be able to contact. The amount of time that it was going to take to open a road (with the Campbell Highway also affected) was going to determine what he did next, but he was already thinking in terms of an airlift. Silver got a report from Highway’s Minister Wade Ischenko, who said that Premier Pasloski would have a full briefing later that day.

The Premier arrived here for Commissioner’s Day events, expressed his concerns and gave some idea of what was happening during informal conversations with this reporter.
Mark Mather was very happy with the cooperation and information he got from the various levels of the government.

Mather, who initially thought he would airlift to Dawson directly from Watson Lake, was advised by Mayor Peter Jenkins to do the thing in two stages, airlifting to Whitehorse and then trucking the groceries to Dawson.

He was grateful for this advice, as it was a considerable saving over his initial plan.
Mather said that Shane Branch, the general manager at Kluane Freightlines, was great, personally arranging for a trailer and driver to be ready at the Air North terminal when the groceries arrived there,

At Air North, Jackie Gabinet and Nigel Cripps at the charters desk sorted out the weight and cost details and began to organize their end, just waiting for a final decision from Mather.

“About 2 o’clock or 2:30 I made the decision that we were going to airlift the product to Whitehorse, deciding that it really made sense if we wanted to keep the community full of perishable foods, not knowing if the road was going to be closed another 24 hours or longer.”

Mather was concerned about more than the population of the Klondike. The store also has to assemble bulk orders for 150-170 bush and mining camps. On Saturday June Mather was having trouble assembling those orders, so they needed to get those supplies in town.
“Air North was fabulous,” Mather said. “They set up two flights, they gave me times and they met the times, actually, to a tee. They ended up landing the second aircraft in Whitehorse at one o’clock, transferred the product over to the semi trailer and at two o’clock that transport truck left – so it was great.”

It arrived in Dawson on Sunday morning at 8 a.m., with all the product in good shape, more than a day earlier than it could have after the frontier road in the south opened on Monday morning.

The Mathers both indicated that the experience had heightened their awareness of the territory’s dependence on its supply lines, as well as giving them appreciation of how well things can be worked out when everyone cooperates for the common good.